The Museum van Hedendaagse Kunst (Museum of Contemporary Art) featured the work of Jimmie Durham with the exhibition A Matter of Life and Death and Singing. Jimmie Durham is an American artist, essayist, performer, and poet. I think because of his background as an essayist and poet, I really enjoyed viewing his work.  The pieces are thoughtful, reflective, and usually have a bit of humor thrown in.  If you are in Antwerp, I really recommend this exhibition!

The quotes that are captioning the photos of his work are taken from M HKA’s other website ensembles.org.

Cortez, 1991, ‘The Spanish conquerer Cortez (Hernán Cortés), portrayed here by Durham as a metallic soldier made of objects and machine parts, pipes and a mask, was the lover of La Malinche and one of the first settlers in the American continent. According to the artist, “Tzvetan Todorov tried to explain that Cortez became a modern man by the curious intention of discovering (and therefore conquering) America, unlike Columbus who intended only to prove that his previous knowledge was correct (and therefore force the New World to be old)” ‘ 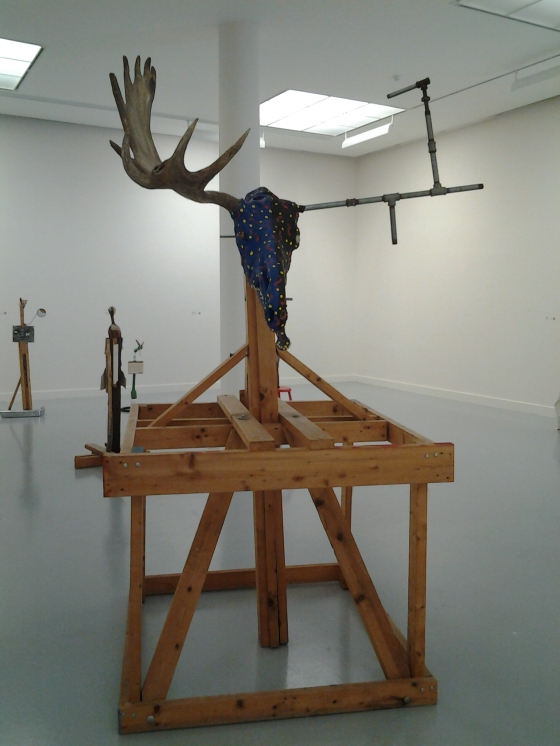 Tlunh Datsi, 1985, Tluhn Datsi was one of the works exhibited in the first show called A Matter of Life and Death and Singing, in New York, 1985. In that period Jimmie Durham intentionally used ethnically coded references in his materials and vocabulary. Tluhn datsi, meaning “panther” in Cherokee, is made of a puma skull with shells, feathers and fur, resting on a wooden stand that says “POLICE DEPT”.
Often asked about the question of identity in his work, Durham has said: “I’m accused, constantly, of making art about my own identity. I never have. I make art about the settler’s identity when I make political art. It’s not about my identity, it’s about the Americans’ identity.” 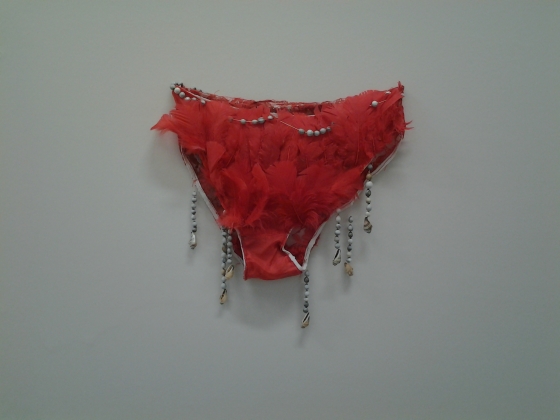 Pocahontas’ Underwear, 1985, “Every place I go in Europe, the children like me, and to be nice to me they give me drawings of Pocahontas because they have just seen the movie. And I don’t like the movie Pocahontas. It is very much against me. It’s a movie that denies my history in very urgent ways, but it’s also a movie that continues to implant a Hollywood definition of me that is so strong nowadays that I can’t address the issue.
I cannot go to every art opening in Italy and once more explain that not all Indians are from New Mexico, that some Indians have blue eyes and a thousand other stories. I can’t defend a reality that everyone knows is not the reality because everyone knows that the Hollywood reality is the reality.”

La Malinche, 1988 – 1991, La Malinche was a Mexican woman who played an important role in the Spanish conquest of her country. Like Pocahontas in the U.S., Malinche was an indian who got married to the colonizer. She was one of the slaves of Cortez and later his interpreter and mistress; their son was considered the first “mestizo”. This sculpture of La Malinche was assembled using a combination of elements: on the one hand, those typically associated to an “indian” identity, and on the other hand “western” elements like her panties and bra. These opposite poles function as parodies of stereotypes and a metaphor of Malinche’s ambiguous character.

Jesus. Es geht um die Wurst, 1992, A sculpture of a human figure, sitting on a stretcher, is partly covered with a crust of manure, mud and blood. His face has a joyful expression which gets disturbed by his metal eye.
At the moment that we might assume that this figure is dead, he springs to life: we see his bright red penis (as if just circumcised; Es geht um die Wurst! – literally: it’s about the sausage!, or still: it’s about the essence!) and he shows us a photo of a mummified dog. 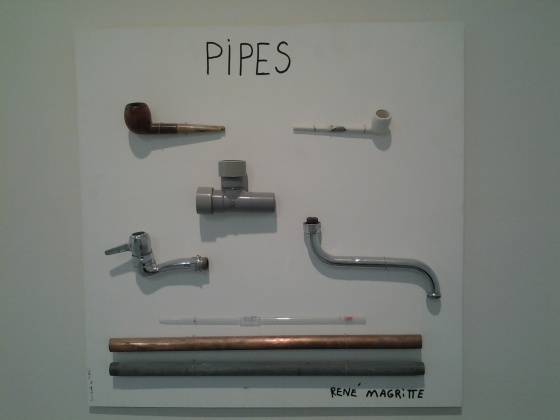 Types of Pipes, by Magritte, 1993, The twin paintings Types of Pipes, by Magritte and Types of Murder Weapons, by Maigret were made for an exhibition in Brussels in 1993. The same collection of objects (different kinds of tubes and pipes) is presented twice, with different titles and signatures, playing with the double meaning of the word “pipe”. The first is signed by Renée Magritte (whose famous Ceci n’est pas une pipe need not to be explained, especially when in Brussels) and the second by inspector Maigret, the famous character from George Simenon’s stories (who besides investigating crimes also had pipes as a trademark).

Types of Murder Weapons, by Maigret, 1993, The twin paintings Types of Pipes, by Magritte and Types of Murder Weapons, by Maigret were made for an exhibition in Brussels in 1993. The same collection of objects (different kinds of tubes and pipes) is presented twice, with different titles and signatures, playing with the double meaning of the word “pipe”. The first is signed by Renée Magritte (whose famous Ceci n’est pas une pipe need not to be explained, especially when in Brussels) and the second by inspector Maigret, the famous character from George Simenon’s stories (who besides investigating crimes also had pipes as a trademark). 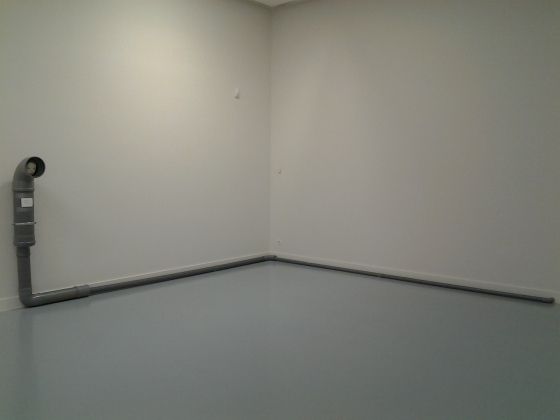 Garçon, Garou, Gargouille, 1994, The face of a boy in papier-mâché comes out of a PVC tube. The title of the artwork seems to justify its elements, creating a series of associations: the garçon (boy); the garou (werewolf, an intermediary being capable of transforming itself); and finally the gargouille (gargoyle), an architectural element designed to drain rainwater running down from the side of a building, usually seen in cathedrals in the form of scary creatures. 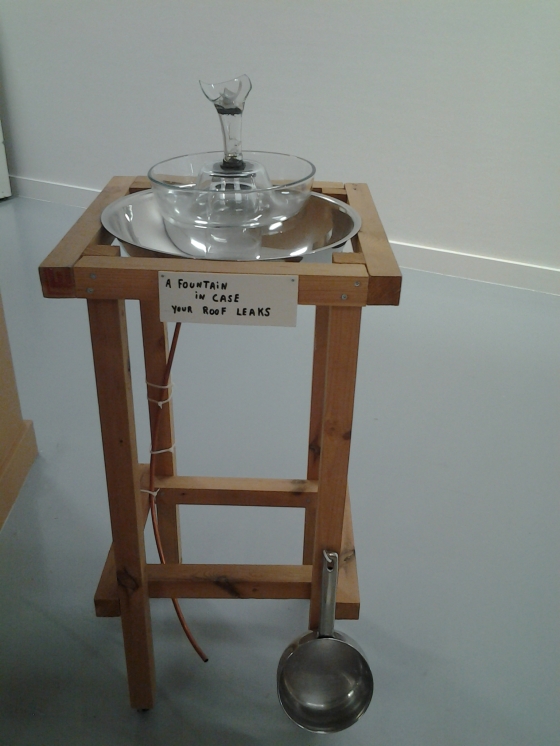 A Fountain in Case Your Roof Leaks, 1996

A Stone Bra for the Venus de Milo, 1998, A photo of the famous sculpture Venus de Milo is pinned to the wall next to a bra covered in plaster. The association calls our attention to the physicality of the material, along with its sensuality and beauty on the one hand and its unnatural aspect on the other. “The curves of carved marble do not look like human bodies’ curves except in crass form”, – said Jimmie Durham – “If you saw a person the color of that white marble, you would be sure it was a supernatural person or some sort of robot.”

Various Elements from the Actual World, 2009, The group exhibition Transmission Interrupted presented work from fourteen artists of different nationalities. The works were about alternative forms of representing the world. For this exhibition, Jimmie Durham made a painting composed of five panels where objects like gloves and credit cards and materials such as gold and Iranian stone are combined with text.

Something (Perhaps a Fugue or an Elegy), 2005, Something (Perhaps a Fugue or an Elegy) is a monumental sculpture of assembled objects. Perhaps like a fugue, it is a composition with the development of an idea, where elements constantly re-appear. Between start and stop (as well as STAR and TOP) we see an entanglement of elements such as cameras, mirrors, all kinds of electrical appliances, pipes, carved figures and pieces of sculptures and other materials. The skulls, bones and the plates signalizing DEATH and NATURE MORTE seem to give us a hint of what it’s all about, and perhaps remind us of an elegy, functioning as a melancholic visual poem. The possible chains of analogies and associations are an invitation to the viewer to endless interpretations.

Perhaps Mr. Palomar, 2003, At first sight, Mr Palomar is another one of Jimmie Durham’s stones that has gained subjectivity though a gesture of the artist. But the title takes us a lot further: Mr Palomar is in fact the name of the main character of a novel by Italian writer Italo Calvino (who Durham has also mentioned in other artworks). Throughout the book, Mr Palomar makes philosophical comments about the world around him such as speculations about the cosmos, time and the true nature of being as well as observations about anthropological and cultural issues.

Here’s a Peanut Shaped Like a Bird, 2006, This humorous piece was made on the occasion of the exhibition Bestiary in Amsterdam in 2006. A peanut reminded Jimmie Durham of a bird; and so the artist added to it tiny paws and some paint and placed it in a wooden cage on top of a colourful pedestal. The artist, nevertheless, reminds us through a note on a board (emphasized by a red arrow) of the real identity of that little creature.

Sweet Light Crude, 2008, “And yet many objects really are beautiful, aren’t they? Is there anyone who does not love oak barrels, with their beautiful shape, texture, and technology? I love metal oil barrels in the same way. (…) When these oil drums are new, they have marvelous words on them, like “Shell” or “Total”; when I was a boy, I remember there was the Humble Oil Company, whose barrels bore the legend “Humble.” For decades, I have used oil barrels, usually the ones that proclaim “Total,” which are bright orange. For the show in Paris, I am making a new piece titled after the petroleum-industry classification Sweet/Light Crude. It is 25 oil barrels stacked three barrels high, each one painted a different pastel color and with a different word: TRUE, PURE, GOOD, BRAVE, and so on.”