For our second day in Stockholm we ventured out into the snow to visit the Moderna Museet (Museum of Modern Art). We took another beautiful walk into the city center, passing typical winter scenes.

You know you’re close to the Moderna Museet when you stumble across the sculpture display: Le Paradis Fantastique. A touch of color in the snow!

This probably made me laugh a little too hard – just taking a break from swimming! 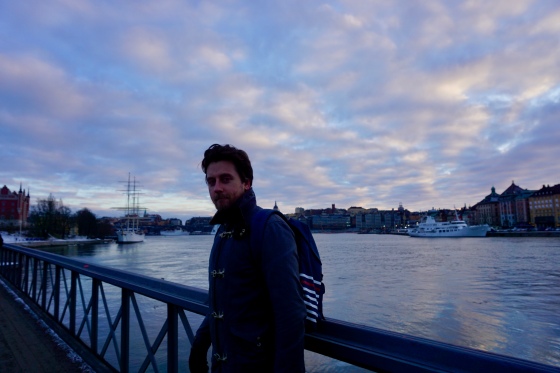 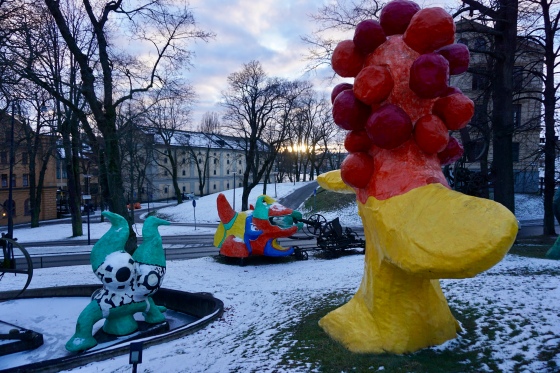 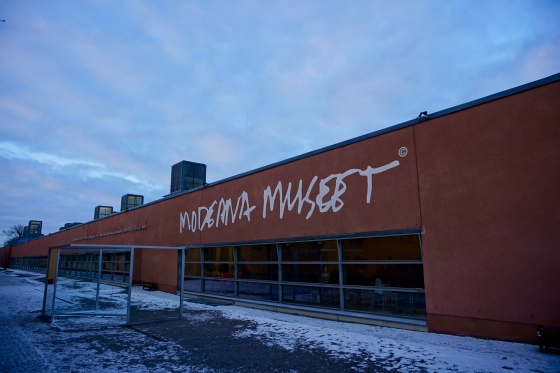 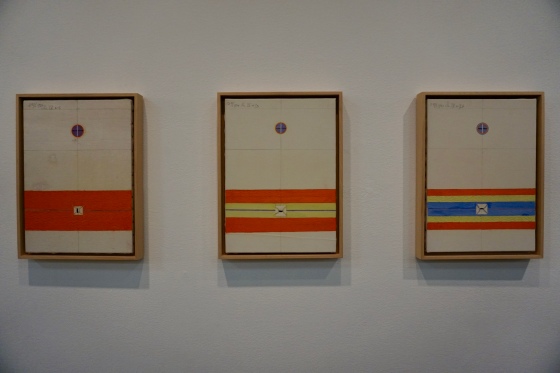 Salvador Dalí; The Enigma of Wilhelm Tell; 1933: The legend of William Tell is about a man who defies his masters and is punished by having to shoot an apple resting on his son’s head. When the painting was bought for Modena Museet in 1967, Dalí was interviewed by Swedish Television and claimed that William Tell in the painting was his father. But instead of an apple, the child in the father’s arms has a piece of raw meat on its head, perhaps indicating the father’s beastly intenions. The figure also resembles Lenin, and there are countless possible interpretations of this. Dalí ends the interview saying, “I hope everything is perfectly clear, but if it is too clear you can call me and I will try to make it more obscure.” 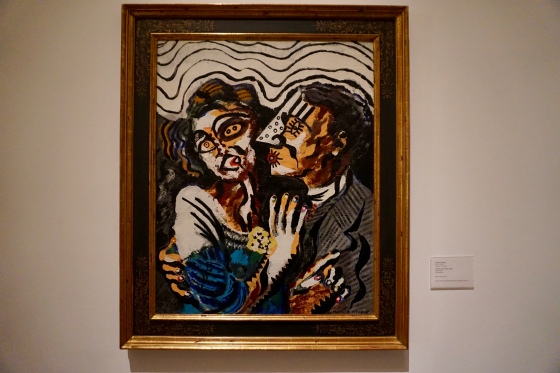 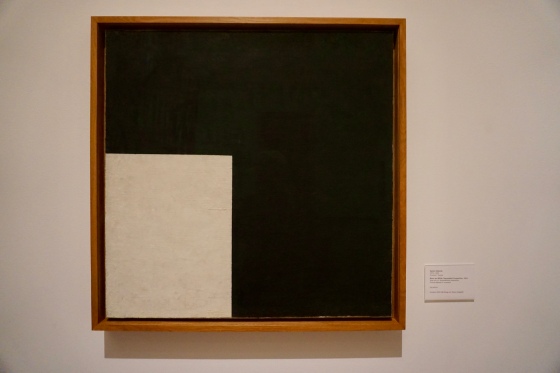 Anna Kagan; Suprematistische Komposition; 1922-1923 : Surprisingly little is know to this day about Anna (Abelevna) Kagan’s oeuvre. She studied for Kazimir Malevich in 1919-22 at the art college in Vitebsk, Belarus. Vitebsk was the USSR’s answer to Paris at the time. Malevich and his suprematist visions made a deep impression on Kagan. She took part in several exhibitions with the group UNOVIS “for the new art”. After Lenin’s death, the authorities clamped down on avant-garde exhibitions and demanded that all artists conform to the Stalinist style of social realism. But Anna Kagan continued to create abstract paintings the rest of her life. In the 1920s and 30s, she made abstract compositions on ceramic goods, prints, and textile designs. 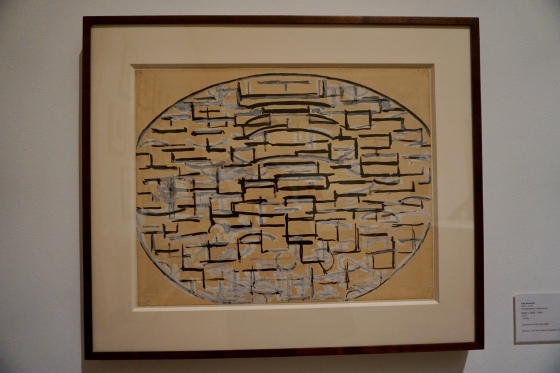 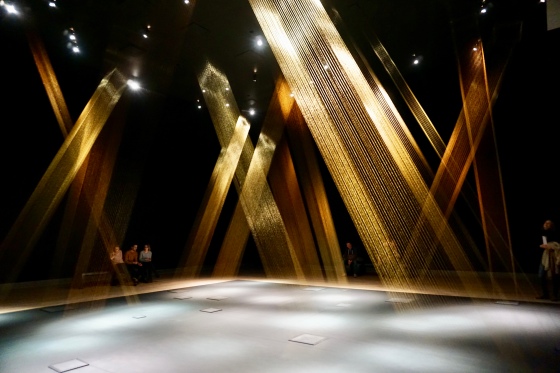 Henry Matisse; Jazz, The Knife Thrower; Jazz, The Destiny; Jazz, The Nightmare of the White Elephant; Jazz, The Clown; all from 1947 : Late in life, Henri Matisse (1869-1954) developed a radical, new technique that gave rise to some of the most fascinating works in his long artistic career. When his health deteriorated and he was in wheel chair, which prevented him from painting and sculpting as before, he instead began using scissors to create art. His assistants covered white sheets of paper with gouache of various colors, and when the paint had dried, Matisse cut out shapes of different sizes. He had them arranged into lively compositions, pinned up on th ewalls and changed around until he was satisfied with the expression and balance between form and color. these collages were then fixed on a background. Jazz is Matisse’s first project using this cut-out technique. He started on it during the Second World War but it was not printed as a portfolio until 1947. “These images,, with their lively and violent tones, are crystallise from memories of circuses, folktales and travels”. Matisse liked the portfolio’s title Jazz since it highlights a parallel between art and music; he saw his work as a chromatic and rythmic improvisation. 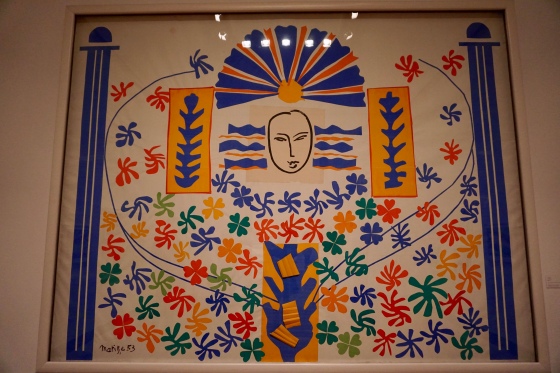 Henri Matisse; Apollo; 1953 : Later, Matisse moved onto larger formats, and when he made Apollo the year before he died, light, love, and joy of life were the main themes. Apollo, who is the god of art, poetry and light, also represents the harmony in art. In these late, colorful compositions, Matisse attained an evident simplicity.

Sturtevant; Raysse High Voltage Painting; 1969 : Sturtevant is perhaps best known for her repetitions of other artists’ works. Like this one: Martial Raysse’s famous Peinture à Haute Tension from 1965. By meticulously recreating selected pieces by male artists int he 1960s and 1970s, she challenged not only copyright laws and demands on artistic originality, but also the authenticity of the concept of art as such. How should the idea of “genuine” art and culture be understood, and how can it be produced and conveyed? In our contemporary digital society, overflowing with clones and copies, these questions seem more relevant than ever. Elaine Sturtevant asked them more than 50 years ago.

Andy Warhol; Electric Chair; 1967 : “I think somebody should be able to do all my paintings for me,” Warhol told an art critic in an interview in 1963. This became possible with screen printing, a technique for mass reproduction that Warhol used in his practice to create works that were often based on advertising and press images. Warhol was attracted to violent news – suicides, car crashes and executions – and began working on these subjects in the early 1960s. The electric chair in this piece is empty, but the scene exudes misery and death. In this particular reproduction of Warhol’s work from 1967, the garish colors contrast with the dire subject matter, in a play with surface and depth that alludes to the voyeuristic side of the tradition of the death penalty in American culture.