Ready for the party to begin!

I’m a bit reluctant to admit it…but it’s been forever since Koen and I have thrown a birthday party. We decided there’s no time like the present! So in honor of Koen’s birthday we threw a Chili Cookoff!

END_OF_DOCUMENT_TOKEN_TO_BE_REPLACED

For Koen’s Oma’s 85th Birthday Party, the family hosted a get together catered by the children and grandchildren! As my blog can attest, we all love to cook and eat well! Koen and I made savory dishes, chicken legs and chicken salads while the rest of the family made sweets and other delicious treats!

END_OF_DOCUMENT_TOKEN_TO_BE_REPLACED

Wednesday, August 15th, was a national holiday in Belgium.  Because I am also off on Tuesdays, I invited Barbara and Sofie (2 of my sister-in-laws) to come to Antwerp and visit museums and also Rubensmarkt, a special market in the Grote Markt that always takes place on the 15th of August, where the vendors are all dressed in 17th century clothes.  During the 2 days, we visited the Fotomuseum (FoMu), Sofie’s choice, and the Museum aan de stroom (MAS, featured in this post: Part II), Barbara’s choice. We also had time to visit a couple of cafés and make a delicious dinner!

END_OF_DOCUMENT_TOKEN_TO_BE_REPLACED

There are so many ways to serve tomatoes, with so many varieties and means of preparation.  With such a versatile vegetable, Koen and I are able to incorporate tomatoes in some form into our meals at least a few times a week.  This week especially I’ve been enjoying them with the warm weather.

END_OF_DOCUMENT_TOKEN_TO_BE_REPLACED

Summer is here (mid-70s) in Belgium, so now is the perfect time for salads!

END_OF_DOCUMENT_TOKEN_TO_BE_REPLACED

This week has actually felt like it is really Summer here in Antwerp. What better way to celebrate than with Vietnamese Summer rolls? Sunday is always my day off, so I took advantage of the sunshine and visited China Town. Although it’s called China Town, maybe Little Asia is a better name because they sell food from all Asian countries, including Vietnam. It’s also the only recognized China Town in Belgium!

China Town is located close to the Central Station and the Koningin Astridplein. I passed the fair on my way. There always seems to be a fair somewhere in Antwerp. 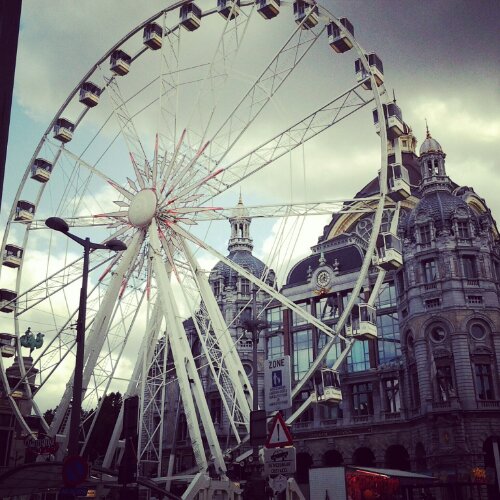 END_OF_DOCUMENT_TOKEN_TO_BE_REPLACED

The 21st of July is the Nationale Feestdag van België. The south of the Netherlands proclaimed independence to form the Kingdom of Belgium (the official name) on the 25th of August 1830. This was the start of the Belgian Revolution, which ended on the 14th of July 1831. Leopold I became the first king of Belgium the 21st of July 1831, and every year on this day everyone celebrates in Belgium.

But because the 21st was on a Saturday this year, I went to the Netherlands to spend the weekend (it’s rare that I have 2 days off in a row!). Koen and I had a relaxing time in Roosendaal, enjoying good wine (from Grand Vin, of course), food, and weather.

END_OF_DOCUMENT_TOKEN_TO_BE_REPLACED

I have fond memories of my Grandpa’s fried okra, and as a Southern girl, the only way I wanted to prepare my okra was to fry it! So tonight I made a Southern dinner for Koen and me: BBQ porkchops, fried okra, and mashed potatoes. I also feel it’s worth noting that I used American barbeque sauce (Sticky Fingers’ Habanero Hot, my favorite, that my mother brought me in April). If you buy barbeque sauce here, whether as a sauce or even as a chip flavor, it tastes completely different – and to me, not nearly as delicious!

END_OF_DOCUMENT_TOKEN_TO_BE_REPLACED

A few nights ago Koen and I had Cobb salad for dinner. Cobb salads are typically American, so I wanted to make it for Koen – plus a lot of his favorite things are in it! In order of the rows I made, from left to right, the ingredients are: avocado, boiled egg, bacon, tomatoes, chicken, and Roquefort, all over mixed greens with a red wine vinaigrette. The salad was a success and in Koen’s top 5 of dinners I’ve ever prepared!

END_OF_DOCUMENT_TOKEN_TO_BE_REPLACED 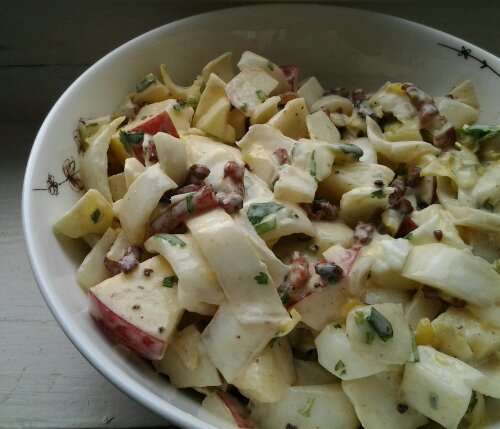 Belgian endive, as the name suggests, is a very popular vegetable here! In Dutch it’s just called witloof. Loaded with vitamins and a delicious bitter flavor, Belgian endive is available year round to make a variety of dishes from salads to casserole type meals. One of my favorite summer combinations is with apple, bacon, and egg. Tonight Koen made the dressing with mayonnaise, Dijon mustard, balsamic vinegar, and cilantro, which made it extra fresh!